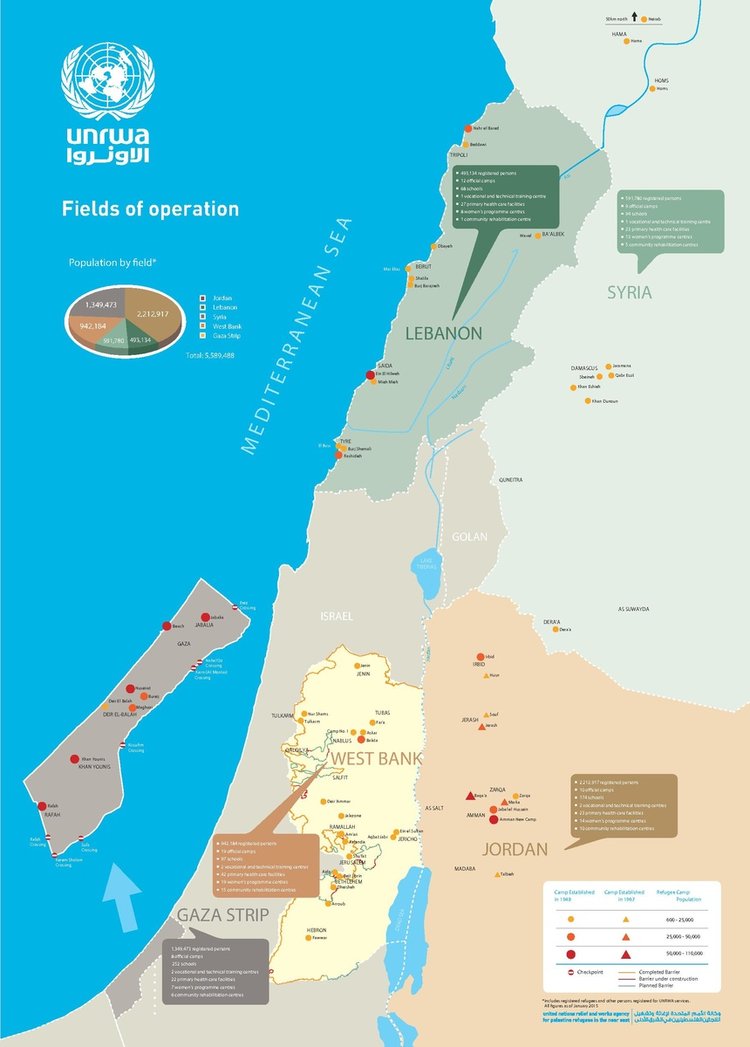 Created in December 1949, the United Nations Relief and Works Agency for Refugees in the Near East (UNRWA) is a relief and human development agency which supports more than 5 million Palestinians who are dubbed refugees. The claim is that the descendants of refugees are also refugees. This is not the conventional definition of a refugee. If one counts only the surviving refugees who fled their homes in 1948 the number is less than 100,000.

Originally intended to provide jobs on public works projects and direct relief, today UNRWA provides education, health care, and social services to the population it supports. Aid is provided in five areas of operation: Jordan, Lebanon, Syria, the Gaza Strip and the West Bank, including East Jerusalem; aid for Palestinian refugees outside these five areas is provided by UNHCR.

In the absence of a solution to the Palestine refugee problem, the General Assembly has repeatedly renewed UNRWA's mandate, most recently extending it until 30 June 2017.
UNRWA is the only UN agency dedicated to helping refugees from a specific region or conflict and is separate from UNHCR.

Formed in 1950, UNHCR is the main UN refugee agency, which is responsible for aiding other refugees all over the world. Unlike UNRWA, UNHCR has a specific mandate to aid its refugees to eliminate their refugee status by local integration in current country, resettlement in a third country or repatriation when possible. UNRWA allows refugee status to be inherited by descendants!

UNRWA has had to develop a working definition of "refugee" to allow it to provide humanitarian assistance. Its definition does not cover final status.

Palestine refugees are defined as "persons whose regular place of residence was Palestine during the period 1 June 1946 to 15 May 1948, and who lost both home and means of livelihood as a result of the 1948 conflict."

UNRWA provides facilities in 59 recognized refugee camps in Jordan, Lebanon, Syria, the West Bank, and the Gaza Strip, and in other areas where large numbers of registered Palestine refugees live outside of recognized camps. Refugee camps, which developed from tent cities to dense urban dwellings similar to their urban surroundings, house around one third of all registered Palestine refugees.